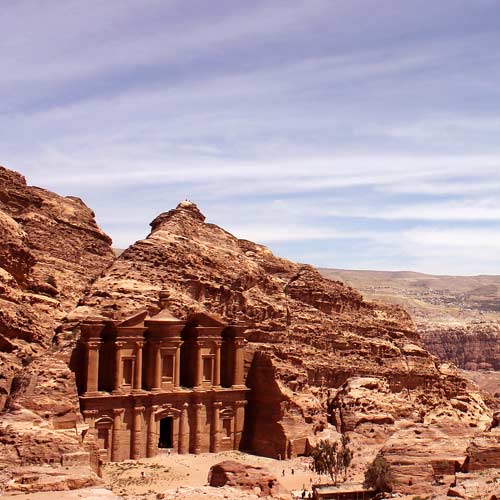 Petra in Jordan – The lost city of Petra lays hidden deep among the sandstone cliffs in the southern Jordanian desert. This ancient Nabataean caravan city was once a great centre of the Silk Road on the ancient trade route from Asia to the Mediterranean. Known only to the Bedouin nomads Petra remained in complete obscurity until 1812 when Swiss adventurer Johann Ludwig Burckhard set out for Egypt. By a turn of luck he was lured south by stories of a lost kingdom in the desert where he soon rediscovered the ancient city and Petra was introduced to the modern world.

What makes it so important?

What makes the concept of World Heritage so important to Petra?

Petra has a sandstone geology that makes it an especially fragile site. World Heritage sites belong to and are the responsibility of all the peoples of the world, irrespective of the territory on which they are located. The United Nations Educational, Scientific and Cultural Organization (UNESCO) claims world heritage sites considered to be of outstanding value to humanity for the identification, protection and preservation of cultural and natural heritage worldwide. In 1985 Petra whispered its way to the ears of international attention when it was one of the first sites ever to be crowned as a UNESCO World Heritage Site.

Why Petra became one of the first UNESCO World Heritage Sites

Petra is applauded as one of the most famous archaeological sites in the world. One of the many reasons this city was chosen is because of the scientific value of its ingenious systems of waterways built to control and conserve water for the provision of the city. This was no small feat considering when at its height in 100 BC, Petra was home to over 30 000 inhabitants. Of irreplaceable cultural significance are the gifts remaining from the Nabataean architects and artisans who masterfully blended Hellenistic architecture and ancient traditions of the East. The exquisitely carved monuments and sculptures of Petra indicate the wide variety of cultures that had influence on the city. Petra’s most elaborate monument is Al-Khazneh, meaning the Treasury of the King. Standing stately at the end of the corridor, it is actually carved by hand thirty meters high in the sand stone desert cliffs. Along with international recognition as a world heritage site for UNESCO the rose red city is featured as the backdrop in numerous films and in 2007 Petra was honoured as one of the new 7 wonders of the world.